The home of witty banter

Of all the things I saw this week I found Steve North the most interesting, possibly because he was talking about something that I and most people are interested in: TV.

The session was crowded and we were all eager to hear what North had to say about Dave TV and if he would answer the age-old question, why Dave and who is he? I am pleased to say he answered this question and I now feel at peace with the world knowing why Dave TV is called Dave TV. One man wasn't so pleased with North's answer and shocked most of the audience with his outrage at Dave being called Dave, calling it sexist, and then as North politely answered his question, he fiddled on his phone.

FYI Dave doesn't exist, which is a bit disappointing. I was hoping for them to bring him out - you know, so that I could put a face to the name.

There was a question/answer interview style to the talk which I found amusing but I'm not sure why. It was being recorded too which felt a bit too professional for the lecture theatre where I'm usually half-asleep on Monday mornings.

The co-ordinator of Dave's Leicester Comedy Festival was there too and gave an interesting talk. I thoroughly enjoyed the Festival this year and am looking forward to its return in 2013.

Now as I sit down to watch numerous re-runs of Never Mind The Buzzcocks and Gavin and Stacey on Dave I will also think about how much I now know about the home of witty banter.


C.Mackie
Posted by creative writers at 14:09 No comments:

"Was nervous but I think that went very well.. I love doing talks like that. Big up everyone at #DMU." That was Jamal Edwards' tweet as he left the lecture hall with the crowd in awe after his inspiring Q&A session. 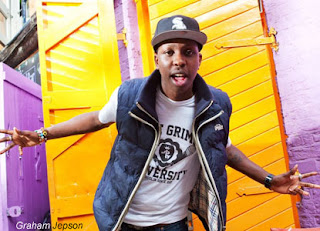 During the hour long Q&A, Jamal answered many questions about his background, his acheivements, his struggles and of future ventures for himself and his leading UK online youth broadcasting site - SBTV. He answered all questions put to concerning his celebrity saying "it's nuts" and "it's just crazy", showing genuine modesty surrounding his achievements.

Jamal promoted self-belief and hard work acting, also telling how he uses his expertise to help others wanting to get into the music/entertainment business. Quoting Robert R. Kennedy's words, "Some people see things as they are and ask why? I dream things that never were and ask, why not?" Jamal said this was a quote he often refers to in life. He also revealed an exclusive of a new artist he had filmed just the day before, allowing us a glimpse of his world.

A perfect representative of the strength and creativity of the younger generation, Jamal Edwards - CEO age twenty-one, was simply real and inspirational.


Celia Wilding
Posted by creative writers at 13:53 No comments:

"Chase your dreams, not the competition"

Jamal Edwards' talk had the highest percentage of youths in the audience. As a "youth" myself, I shouldn't have noticed. But I love that as a young, accessible entrepreneur, Edwards has managed to interest so many of my generation in pushing their potential. He didn't audition for a show like Britain's Got Talent or The X-Factor but, as a normal guy from a normal background, he made himself a business out of nothing but his own passion and a camera he received for Christmas. His business that has led to the success of other artists, one of the more famous ones being Ed Sheeran.

Listening to Edwards talk made me realise what a natural businessman he was, which was lucky as he doesn't appear to have been taught any business at school. He spoke of new ventures which he's undertaking as he doesn't want to exclude or alienate anyone from SBTV. He wants to continue letting it grow and change. He mentioned expanding overseas as well as posting videos of poetry.

He's a businessman without the greed. Though he likes the money, he claims that if you're only doing it for the money then it will not go well. He puts his success down mainly to being his own target audience. Shrewd.

He clearly wants to be an inspiration and a role model, but at the moment he humbly believes that he has yet to reach that stage - and that he hasn't reached his fullest potential yet. But when you knock out quotes like "chase your dreams, not the competition" and already own a very successful business at the age of 21, it's obvious that you're going to be an inspiration.


Maz Haynes and Elise Cook
Posted by creative writers at 13:30 No comments: