People against the machine

After a string of classic movies like Kes, Ken Loach brings us the deeply moving I,Daniel Blake. This is the film that earned Loach his second Palme d'Or award as well as a BAFTA for the outstanding British film to 2016.

I, Daniel Blake is underpinned by the idea that the benefits system is not jusr a “monumental farce” but that the system is also being used as a political weapon to discourage people from claiming the benefits they need and to which they are entitled. Even though Daniel Blake has a heart condition which prevents him from working, Benefits Office staff him to apply for Job Seekers Allowance and to keep applying for jobs which he can't take, on medical advice.
This film isn't just about politics. It's also about people and their personal relationships. As the system tries to reduce people in need of help to mere numbers, there's an emerging sense of community as the less fortunate and those who have been abused by the system pull together to oppose the featureless machine that threatens to cruch them.

Thomas Jack
Posted by creative writers at 15:36 No comments:

Meet the man in the white suit 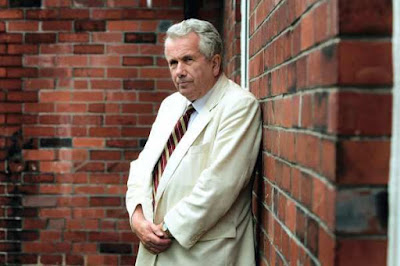 This year’s Cultural Exchanges festival here at DMU is full of exciting events and personalities. One of those is the celebrated news reporter and politician Martin Bell.
Bell is known for his war reporting in Bosnia, where he was almost killed by shrapnel.  He covered foreign assignments in more than 80 countries and left the BBC in 1997, to follow a career in politics as an independent MP.
His presence at this festival will give students and writing enthusiasts an opportunity to hear from the man himself.
For Journalism and Creative Writing students like me, this is an unmissable chance to ask questions not only about what is was like reporting in dangerous zones, but also to ask for advice on writing news stories and books.
The event only costs £3, which is a small price to pay for the opportunity of meeting such an influential character.
So, if you’re a fan, or just have an interest in politics, journalism or writing, join us Friday, 3rd March from 6-7:30pm. You can book here.

Sara Torres Vinagre
Posted by creative writers at 15:55 No comments:

Maybe you've always thought you want to trade in the early 6a.m. commutes, for knee pads and glittery pants while you walk out to thousands with only the greatest hits of mullet rock to accompany you. If so where better to find out more, than a discussion about the performance behind your hidden desire? It's taking place in the Clephan Building at De Montfort University at 4p.m. on Friday, 3rd March. You can book tickets here.

DMU will be welcoming Carrie Dunn, Broderick Chow, Ben Litherland and Claire Warden for a discussion of how professional wrestling might be understood as a performance. Let's hope the chairs are nailed down and the tables stay in one piece.

Photo by Ed Webster
*As you can see in the picture above, one man is attempting a flying sideways hug in the direction of one who we can only assume is his best friend. The man in the stripy t-shirt is what we call a 'cuddle invigilator' whose job is to make sure the cuddle contains enough love and warm feelings. and warm feelings.


Jack Robbie
Posted by creative writers at 15:48 No comments:

I am what you'd call an idiot, and in true idiot fashion it took me a couple of weeks to remember I had to reserve tickets for Cultural Exchanges events at De Montfort University, where lots of established people come along oozing cleverness, showing us little students how it's done.
To my overwhelming relief I found Nina Stibbe tickets were still available. Nina Stibbe, for all those who live under a rock, is a bestselling novelist who used to live in Leicester. She's going to be back on home ground on 2nd March between 5 and 6, and you can book tickets here.
Nina Stibbe's first book, which has been adapted for TV, is a collection of letters she wrote to her sister called (not surprisingly) Love, Nina. I started reading it partly because of the wonderful reviews, but mostly because I like the name Nina. Needless to say, I then fell in love with the book. It's about a nanny in London who writes to her sister about all the trials and tribulations she has faced being a nanny. Basically, it's brill and hilarious, but don't take my word for it, read it yourself.

If you too love the name Nina, or just love her books, come along, because you certainly don't want to miss out!

Miss GW
Posted by creative writers at 15:35 No comments: