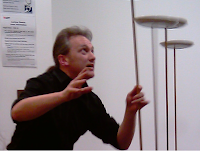 The night started with free wine and canapés, a sure way to win the heart of any student. After half an hour or so of casual dining and conversation we were ushered into the auditorium for the event proper to commence.

It began with a gentleman reading from his father’s journal, which chronicled his time working in the theatre. So began a remarkable series of personal and deeply-involving tales of a bygone era, interspersed with live performances.

Things took a turn for the surreal though when several clips of variety performances were played. As the film showed a man and his assistant playing xylophone and drums with great enthusiasm, the gentleman two rows in front was tapping his fingers perfectly in time to the music, catching every jaunt and flourish. Then when the compere announced that some of those very performers would talk to us, the finger-tapper was among the small group who made their way to front.

There was an immediate sense of family and connection bewteen all these people had. The man drumming along was the father of the man who had escaped a strait jacket not half an hour before. And when a gentleman stood in the audience and mentioned his father by name, all those on stage recognized that name. The people on stage talked not only to the audience, but amongst themselves, reminiscing of days gone past, and acts and people they knew. Somehow, through all this, they made me feel a part of something that happened fifty years before I was born.

Pictured above Andrew Van Buren during the closing act of the night (picture taken and published with permission from the subject).

Posted by creative writers at 14:32